This episode of PopCast is an in depth conversation with André Boulay from YoYoExpert.com. I asked André about how he got into yo-yoing, how the pandemic has affected the hobby, what it’s like switching from being a yo-yo pro to being a yo-yo store, and if we’ll ever see another Dark Magic.

PopCast is a crowd sponsored yo-yo show. Huge thanks to Taka, John Anderson, and the rest of my sponsors on Patreon.com/docpop Just a note, André is one of the sponsors of this show, but he had no say in any of the questions I asked or how it was edited. I just thought he’s a cool person with a rad yo-yo story.

I’m giving away The Dark Magic bootleg yo-yo that we show during the episode. This has been a coveted part of my collection for a while, but it seems like the perfect giveaway. Find out how to win it on my https://www.patreon.com/posts/54347772

This 45th episode of the PopCast Yo-Yo Vlog is a special one. It’s a chat with three yo-yo legends: Rick Wyatt, Mark Montgomery, and Coffin Nachtmahr. So sit back for a special hour long conversation with these influential yo-yoers. We talk about how they got into yo-yoing, their predictions for the future, the state of diversity in yo-yoing, and much more. The Day Tripper is a new yo-yo I’m releasing this week with Zip Line Strings. To celebrate I wanted to share this recent Q & A video I did with Jeremy in his home studio. Thanks to everyone who contributed questions.

I’m still planning on releasing a new episode of PopCast that is all about “redirects” with modern responsive yo-yos, but there was an error with the footage I shot on Sunday, so I’ll have to reshoot it all sometime this week. I hope to have it up before the yo-yo launches.
The Day Tripper will be available on DoctorPopular.com AND ZipLineStrings.com at 5pm PST this Friday, January 15th. Price will be $85 USD.

Patreon members, don’t forget to use your 10% discount code when checking out! In this episode of PopCast, I chat with Coco Sun about our favorite binds and our thoughts on some of TopYos newest releases.

Be sure to leave a comment on a the Patreon page for a chance to win one of the TopYo yo-yos we featured in this video.

A few months ago I flew out to St. Louis to check out the United Yo-Yo Contest. While I was in town I got to hang out with Kyle Nations, one of my favorite modern responsive yo-yoers, and shoot a clip video of some of his rad tricks.

This is the first non-Doc Pop clip video I’ve made in a loooong time and I really love how it turned out. Kyle is using a Weekender Yo-Yo, which I sell on my site and is great for responsive yo-yoing.

If you’d like more goodies, check out this long interview I shot with Kyle too. Sponsor me on Patreon to see these items.
To view this content, you must be a member of Doctor's Patreon at $1 or more Modern Responsive yo-yo play is a new way to look at old school yo-yoing. Rather than focus on trying to see how much spin you can squeeze out of a fixed axle yo-yo, this new style focuses on balance, regenerations, and creative tricks you can do without the yo-yo even spinning. It’s like a cross between kendama, contact juggling, 1A, and 2A yoyoing. If you are interested in getting started, check out the newest episode of PopCast, which is a guide on many of these responsive trick concepts and combos.

There are lots of great responsive yo-yos out there, but I truly love the “Doc Pop” Legend Wing yo-yos available on my shop for just $14. I’ve also shared an in depth interview with Ed Haponik about his @bandalores project on Instagram. Be sure to give them a follow! Last week I checked out the Cal State Yo-Yo Contest and chatted with lots of cool people. Most of this footage will be used for my next episode of PopCast, but I had some great interviews that I thought I’d release as standalone videos.

The first of these is a chat with JD Steel about the changes in the yo-yo industry and how YoYoBESTBUY will continue to evolve. Watch it here and help sponsor future episodes by support me on Patreon. 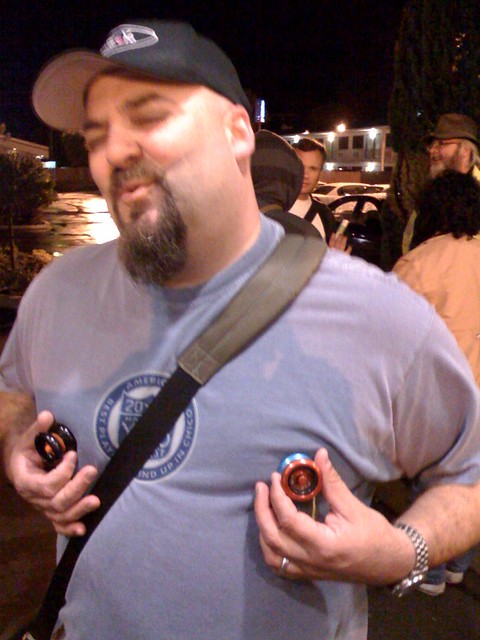