I have just heard from the ABC executives that our show date has been officially moved to July 6th!

So, watch it this Thursday if you like, but be sure to schedule a free evening for the 6th, and might as well go ahead and request the following day off from work to… Cause your just gonna stay up all night watching it over and over again on your TiVo.

I’m finishing up the last of the silkscreened and embroidered Hand of Yo shirts, if you interested, send me your shirt size (keeping in mind that American Apparel is just a little smaller than other tees) and I’m expecting a new yo-yo in the Doc Pop Store any day now. 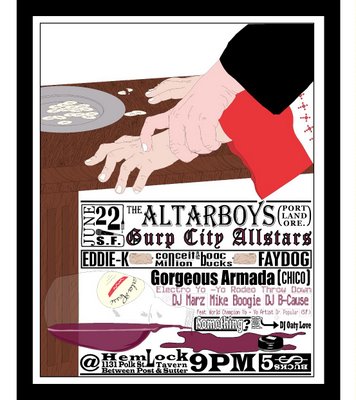 This Thursday, June 22nd, I’ll be performing with DJ Marz at the Hemlock Tavern. I’m not exactly sure what we’ll be doing yet, but I’m sure it’ll be keen as heck. Here’s a secret, if you say “Pippylongstockings” at the door, you get in for free, not kidding.

I’ve been informed by the producers over at ABC that our episode of Master of Champions will air on June 29th, unless the big basketball game goes on an extra week, then the show will air on the following thursday.

That being said, here is a listing from the Futon Critic with show info and a different time slot. 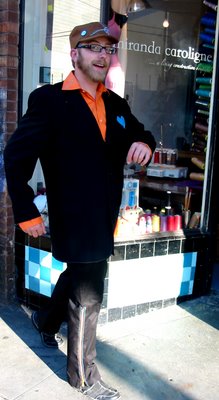 There’s a new boutique on lower fourteenth, right beside where Needles and Pens used to be*. It’s owned by Miranda Carol’s, and primarily features Miranda’s own designs, however my friend Bethanne has some jewelry there too.

For the show, I wanted our team to have some decent costumes, so I went to Ross and bought three orange shirts to work with. I got together with Miranda and discussed my idea, based on old shirt with a heart on the sleeve that I designed (that will also probably be in the show also). Amanda sewed the original shirt design.

I’m really happy with the end result, I also bought a black coat to have as a back up in case we needed it for our stunt. A heart was added to the coat as well as cool blue and orange trim.

Miranda took my heart on the sleeve idea and made it uber sexy, note the embroidery on the collar too. She also added a zipper to my pants and surged the edges of the coat with orange and blue thread. 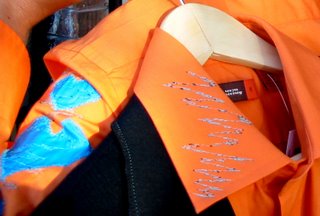 * Needles and Pens moved over to where Otsu used to be** on Guerrero and 16th..

** Otsu has moved across the street from 826 Valencia. 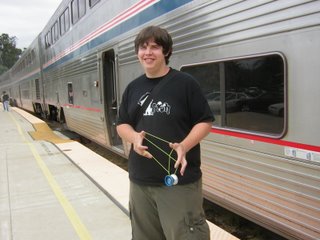 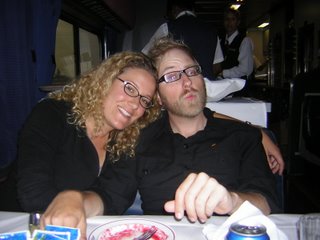 It’s been a while, not due to a lack of things to type about, but actually because I’ve been overwhelmed with new projects.

First off, I will be going to LA next week to shoot some material for an upcoming show on ABC television. I don’t want to talk to much about it right now, because things always change, but a camera crew will be coming to SF this weekend to shot some bio material on Doctor Popular, and then me, Paul, and Augie will be heading down to LA to compete as a team against another yo-yo squad. The show will likely be airing in early July.

My buddy RJ has updated the site a bit, fixed some links and added some stuff to the store. I have copies of my newest comic book “Ideas” for sale, super cheap and it’s 24 pages!

Next week I will be picking up special edition Doctor Popular Element X’s from Buzzon. These will be recessed, big bearinged, marble blue, black metal rimmed, with bright orange pogs. Gaudy? Heck ya, that’s the point!

Yes, Absolutely. is the name of a new yo-yo company headed by Phil Cox and myself, our first yo-yo, The End will be a special edition of Anti-Yo‘s Eetsit, featuring an awesome new anodized paint job, laser printing, silicone response, and shmoove rings. This yo-yo is about a month away in production.

For fans of Drown Radio, my music project, check out NerdcoreHipHop.org and RhymeTorrents.com for some new tracks. Drown Radio will be featured on a couple tracks on the upcoming Nerdcore Hip Hop Compilation coming out on June 6th and downloadable for free from RhymeTorrents.com. Here is a new verse and beat I did for my session on the Nerdcore Posse track. I like it… note the mouth harp.

Those of you in LA, send me a “hey howdy” if you’d like to be part of our National Yo-Yo Day hang out activities. I’m propossing a game of Miniature Yolf right here, right now.

If you live in the Bay Area and are over 21, this Sunday is Consurtium of Yo at Zeitgiest bar, this would be a good chance to wear your Doc Pop Hand of God shirts and be caught on film by the ABC film crew.

Check my calendar on www.DocotorPopular.com