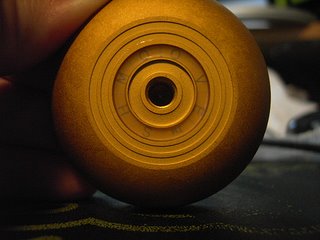 First off, Phil and I would like to thank everyone for their support of the our first yo-yo, The End. As of Saturday we are sold out, that was lightning quick, but not a big surprise since we saw a big demand for this type of yo-yo. Yes, Absolutely. is already at work on our next yo-yo the BLT.

Feedback of the End is high, and most of them have been shipped this morning. Boxthor got his hands on one early and has posted picks on his Flickr page, check those out. Special thanks to Kiya and Sonny of Anti-Yo, The End is pretty much just a souped up Eetsit, and none of this would have been doable without their making it possible.

I have a new video out called Coast On Starlight that was started immediately after arriving back from shooting Master Of Champions in LA… So it’s been a long work in progress. It’s been delayed up until now largely because of problems with iMovie, but I figured out a cool trick to get it all up and so here it is! Featuring new music by Drown Radio (of course).

0 thoughts on “Coast Starlight… End of the line…”